I’d seen the flavor and I have to admit, it was the one to which I was least looking forward. While I love bananas (I’ve been known to eat up to 10 per day), I generally don’t care for banana-flavored things. Arctic Zero really surprised me. The vanilla wafers give it a more subtle taste than just BANANA and I was really digging it.

This was another one I was really curious about and it tasted very sweet. It was slightly tart, slightly creamy, a pretty interesting mix. It has a great flavor for the texture of the food and if you had to pick one that was “ready to go” without the suggested 20 minutes out of the freezer, it’d be Pom. If it’s right out of the freezer, it’s almost like sherbet, but the creaminess of the 20 minute wait was also welcomed.

Brownie Blast definitely lived up to its name. There are a ton of brownie cubes in the pint and they’re very rich. If you’re a chocolate lover, this needs to be your go-to for not feeling guilty.

Sweet cinnamon, this was good. The best part about it was how different it was: A welcome change for those of us who prefer “pastry” flavors, versus the more “exotic” choices. Like Poppin’ Pomegranate, this was another one whose flavor really paired well with the texture. I also think it was the most reminiscent of a certain Vermont-based creamery, so it’s a good flavor for converting your friends (or yourself). 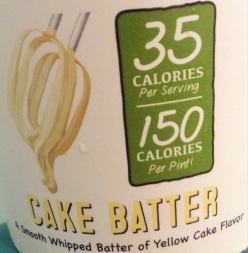 Cake Batter was the real one I was looking forward to, and it was everything I thought it could be. It tasted the second sweetest and definitely the creamiest. It’s wonderful at first and then that after taste hits and really seals the deal. We have a winner.

So all the flavors were pretty much awesome! I’d still say Banana Pudding was my least favorite, but I know it’ll have its fans and it’s worth a try. Each pint only has 140-300 calories and the fiber content is really exceptional. I really dig the low fat and sugar content for my macros. Look, it’s not real ice cream. That’s true. But if you’re lactose intolerant or don’t want to feel bad about your dessert, check these guys out! You won’t regret it.