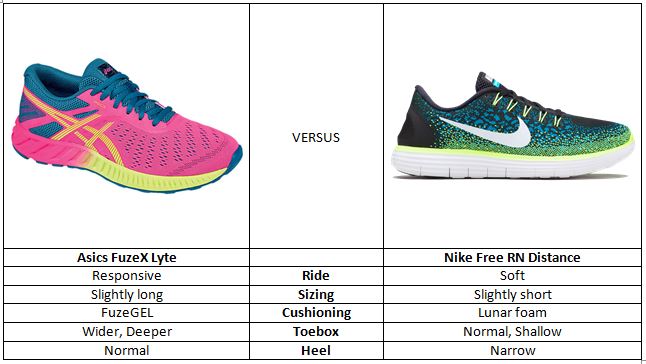 Nike and Asics are some of the most recognized running brands out there. They sponsor entire national teams, they’re such juggernauts. However, they have two very different development philosophies. Nike is a known innovator. While their Zoom Air has been a constant technology in their running footwear, they’ve also developed Lunarlon foam, made minimalist running go mainstream, and keep churning out new developments, every year. Asics, however, encapsulates Japanese ideas on advancement, with slower refinements. On the other hand, the FuzeX shoes represent a major shift for them.

FuzeX GEL, thank God, is a unique blend of Asics’ normal GEL and foam to reduce weight and provide a more even feel under-foot. Similar to Brooks’ BioMogo DNA and Super DNA. The biggest change might actually be the full-contact outsole. Normally, Asics GEL shoes contain a plastic shank in the middle of the midsole and outsole, which can make transitions a little clunky. Their new FuzeX shoes are responsive and feel fast, even if the weight of them should be a little lighter (9.9oz/280g men, 8.2oz/232g women). I’ll chalk that up to being the first, sort of experimental year.

Nike, meanwhile, has combined two pre-existing technologies by putting their Lunarlon foam in the Free line for the first time. This created a slipper-like feel that’s just amazing, although not everyone will like it as soft as it is. On the other hand, the shoe’s flexibility is great for going up hills, and I personally like it for easy runs. It’s much lighter than the Lyte (8.8oz/249g men, 7.3oz/207g women), but the softness isn’t great for speedwork. It seems like a little more of a niche shoe, although in the end it won my money. Speaking of, the more versatile FuzeX Lyte is also easier on your wallet, at $85, compared to the Free RN Distance’s $120 price point.